Women are powerful. They are more than just homemakers, loving mothers, and dutiful wives. Equipped with finesse, intelligence, and intuition that often surpasses that of their male counterparts, women are stellar leaders and change agents.  Rica Kelly is a young woman who fervently believes that women are unstoppable with education. Education is the fuel they need to change the world. She founded The Global Women of Power Foundation in 2016 with a specific mandate to provide access to quality education and leadership opportunities to women and girls from across the world. Her passion for education and female rights make a truly compelling story.

Rica comes from a family of educators. She, therefore, became interested in teaching at an early age. Education became her passion. The struggles some people have with grasping key concepts fascinated her the most. So, she vowed to herself that she would become an education researcher so that she could add to research on learning barriers and educational planning.

While pursuing her B.Ed. in Language Education with a Literacy Studies major at the University of the West Indies (UWI), the lack of research on Caribbean education appalled her.  She was born in Jamaica and completed infant school in the United Kingdom. Her mother, a Jamaican native, moved with her back to Jamaica where Rica later attended high school. Her experiences in both education systems further fuelled her passion to grow education research in the Caribbean.

In 2014, she pursued an MA in Curriculum, Pedagogy and Assessment at the UCL Institute of Education, University College London.  This created the path for her to pursue a PhD in Education. The highest level of tertiary education facilitates her dream to truly add value to the Caribbean education research landscape. Her PhD study is entitled Mapping the Relationships between Innovative Learning Spaces and Learning: An Exploratory Study of Pedagogies in Jamaica and England. This is only the beginning of the difference Rica hopes to make on Caribbean education and more specifically in the field of transdisciplinary or cross-disciplinary research. She lives by the tagline of her business brand, “Fostering creativity through multiplicity.”

The Global Women of Power Foundation

Very few people would consider creating a far-reaching organization that can impact education for women and girls from across the world. Rica doesn’t strive to be ordinary.  She wants to create a movement of inspired and educated women who are committed to changing the communities in which they live. After completing her MA, she applied for some school leadership opportunities in Jamaica. That experience, as well her earlier experiences and those experiences of her female peers, proved to her that there is a bias towards men for leadership roles; women are rarely given leadership opportunities despite being equally or even better qualified than their male counterparts. She hopes that The Global Women of Power Foundation will change that.

The Foundation has been recognized by Jamaica’s Ministry of Culture, Gender, Entertainment and Sport and is supported by the Bureau of Gender Affairs, Jamaica. It has also been recognized by the United Nations Educational, Scientific and Cultural Organization (UNESCO). Rica and her team strive to accomplish the following objectives:

Rica believes that though men continue to contribute to the inequality problems that females face, females are primarily responsible for gender inequality because they perpetuate the patriarchal structure. Too many women try to tear each other down instead of build each other up. Therefore, she hopes to create a series of sensitization initiatives to change women’s perspectives. Her organization is committed to its motto, “Empowering females locally, connecting globally.”

A woman of Rica’s caliber would have a cadre of people who inspire her. Her top 3 role models are: her mother (Merle Kelly), Oprah Winfrey and Chimamanda Ngoi Adichie.  The value her mother places on education, coupled with her ability to overcome struggles because of her education, has motivated Rica to be the woman she is today. Some of the things Rica envisions have already been done by Oprah Winfrey.  She hopes to learn from Oprah’s triumphs and failures in the female empowerment sphere.

Chimamanda Ngoi Adichie is a renowned Nigerian female activist. Rica admires the way she explains feminism and her approach to inspiring women.  She was able to overcome bullying and harsh treatment in Nigerian, in order to be the powerful activist that she is today.

Rica lives by an inspiring philosophy. It reads, “Be crazy enough to convince yourselves that perfection is not a figment of the imagination, in order to aspire to become better versions of yourselves.” Be creative and explore your talents. Don’t be afraid to think outside of the box. Don’t try to be like others. If you train your mind to believe that perfection is achievable, you will achieve excellence every time.

Rica may be contacted at: 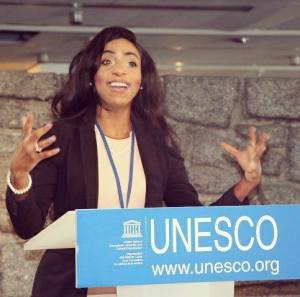 Buy my book at Amazon.com!

Buy my Book at the IBookstore